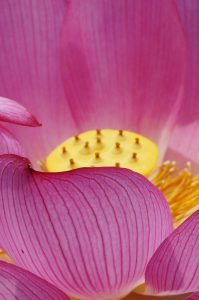 The origins of Shorenji come from when the wife of Emperor Saga was pregnant, and the emperor prayed to and enshrined Jizo Bosatsu for the safe birth of the prince. After that, this land became known as yorase, or “coming feet”, after Kobo Taishi (Kukai) stopped by Shorenji when he was establishing Mt. Koya. At that time, he prayed for the path to Mt. Koya to be sunny, and even today Shorenji is loved as a temple to pray for clear weather, rain, and safe births. 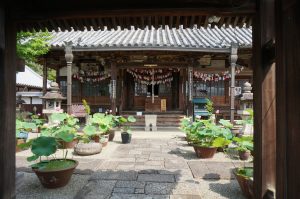 Now, the main hall is decorated with many yet-to-be-burned teruteru bozu dolls made at an event by college students from Osaka, and these liven up the area around the real Jizo.
The characters for “Shorenji” mean “Life-Lotus-Temple”. In tribute to the name of the temple, its Chief Priest, who is growing 120 varieties and 300 pots of lotuses, is a Doctor of Life Science. In this Umashi Natsu Meguri, after a lecture on lotuses, we viewed the many lotuses on the temple grounds, and were given explanations for each of them. 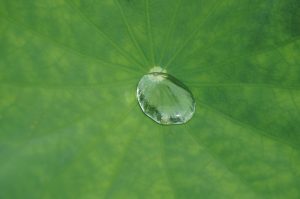 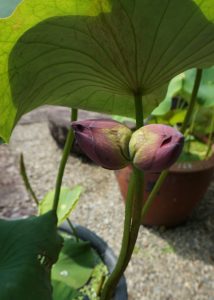 In Nihonshoki, the oldest chronicles of Japan, there is a recording from July, 635 A.D. that says “Congratulations, the lotus in Tsurugi Pond, one stem and two flowers”. As “an omen for something good”, the double-headed lotus has been considered a lucky flower since ancient times, and it has been said that people become happy by just seeing it.
The Chief Priest said, “It is like a four-leaved clover”. It does not pass on its genes, so this flower is limited to one generation and extremely rare. I am happy that I am just able to see it!

We returned to the visitors’ room, and while hearing stories of lotuses that need to be grown in large containers, ones that can grow in small containers, and how difficult it is to know if you can grow them from seeds, we tasted and compared the deep flavors of lotus flower tea, lotus leaf tea, lotus heart tea, and lotus tea. Next, we moved to the main hall and experienced ajikan meditation in front of the object of worship. After the participants have relaxed their mind and body, we ate a special bento lunch from the Michelin 1 star restaurant, Gojo Genbei, to end this blissful plan. 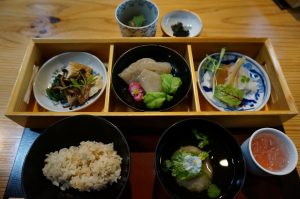 On the grounds where “Japan began”, in Asuka Village you can experience plant dyeing using plants that appear in the Man’yoshu.
Surrounded by colorful flowers, this house is called the “Plant Dyeing Research Center”. The teacher makes dyes from various plants everyday and expresses beautiful patterns.

First, choose the material that you like from up to 80 different patterns woven in cotton.
Depending on the material, even the same color or pattern can look completely different. It takes a long time for participants to choose a material…we understand if many catch your eye!

Dyes change depending on the season, but they always have up to eight dyes for participants to use.
When we visited, they had Canadian Goldenrod, Onion Skin, Chestnut Burr, Loquat Bark, Red Rice, Jasmine, and Rubia.
Even if you just say “yellow”, from lemon color to yellow with gold tones, there are a variety of colors in which it can be dyed depending on the plant.
The place is decorated with many works of plant dye, and whether they are works with similar colors, or works that show a gradation of all of the colors, every work is very fascinating!

After the experience, we heard stories about the Man’yo plants that appear in the Man’yoshu and the plants that are used for plant dyeing.
Since the teacher is also a forest instructor who protects the nature of Asuka Village, please ask not only about plants, but also about the beautiful nature of Asuka Village.
From individuals to families and groups of friends, I hope you all have the chance to enjoy this experience!

Details of this program are below: ↓↓

Now, we can meet “Bambi!”, or fawns (baby deer), at Nara Park.
While pregnant deer are protected from an early stage at Roku-en, which provides protection and treatment to deer that are injured or sick, deer are after all wild animals, so there are mother deer who give birth without this protection, and are now taking their children for an early debut at Nara Park.
Of course fawns born at Roku-en will in turn make their debuts at Nara Park, too. 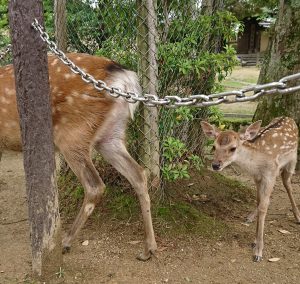 The fawns I met at Nara Park today had a head and body length of 60~70 centimeters. The height of their shoulders was 40 centimeters.
They trotted along with their mothers. 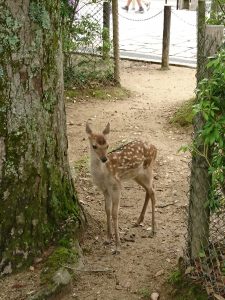 The following was written on a flyer from the Nara Deer Protection Agency, so we adhere to it.

“If you see a fawn (baby deer) in the park, please keep an eye on it.
For two to three weeks after birth, fawns have the habit of spending time hiding in the grass.
Please don’t touch the fawns. If their mothers detect a human scent, they sometimes stop feeding them milk. 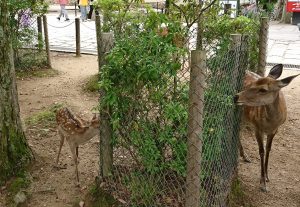 Please beware of the mother deer. The mother deer have strong motherly instincts, and sometimes attack those who are just close to their children.
Deer will mistakenly eat garbage, so please take all of your garbage home with you.
The deer inhabiting Nara Park are wild animals and mainly eat grass, nuts and berries of trees, and snack on “shika senbei (deer crackers)”.
Anything else will upset their stomachs, so please don’t feed them anything else. 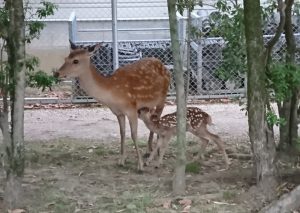 Indeed, though it may be common sense, we still have the tendency to run and say, “It’s Bambi!” Let’s be careful when we go to the park. Nara Park will continue to be a place to co-exist with deer. The deer are waiting for us at Nara Park anytime. Please come say hello! 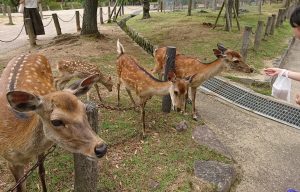