Have you ever eaten the rice cooked by “Kamado”?

It is a most delicious way to taste Japnanese rice!

“Kamado” is Japanese traditional oven with firewood. It is usually used for cooking rice. But nowadays you rarely see it in Japan.

“Kamado” had been popular in our daily life until electronic rice-cooker and gas-range appeared.The heat can be controlled by adjusting the amount or positioning of firewood. The heating power is weak firstly , and then going on high.  At the end of cooking, the power is going on low again.  The series of the heating power brings out the flavor of rice. That’s why rice cooked by “Kamado” is more delicious and tasty.

Recently, electronic rice-cooker companies develop their products to close Kamado taste, however it is a bit difficult to reproduce the taste perfectly in the household.

Hiking Adventure in Mt. Kasuga Primeval Forest is our newly launched experience program. An expert of Mt. Kasuga will guide you to the historic and cultural world. 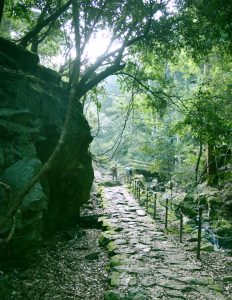 Mt. Kasuga Primeval Forest has not been preserved untouched but preserved touched by people since Heian period. A part of the forest, where the people of Todaiji Temple and Kofukuji Temple were picking Japanese star anise, was named ‘Kazan’ (Written 花山 in Japanese. Means flour mountain.).
When trees were damaged by typhoons, people planted native trees to maintain its original condition. 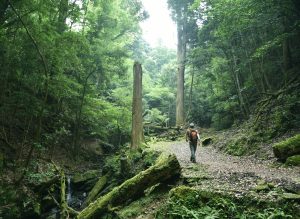 A lot of subordinate shrines are exists in Mt. Kasuga Primeval Forest, and still widely practiced by people. Between Heian period and Kamakura period, many Buddhist priest trained in this huge forest, so some stone images of the Buddha are still remain.  In addition to this, there are some places where we can feel this historic and cultural atmosphere. For example, the Japanese cedar which has been believed as a ceder planted by Toyotomi Hideyoshi and ‘Takisaka-no-Michi’ (old Yagyu highway). 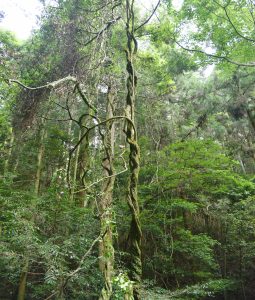 As written in the beginning, Mt. Kasuga Premival Forest is very rare forest. Coniferous trees like cedar named ‘Kasuga cedar’, maple and Japanese hemlock, broad leaved deciduous trees, ferns and mosses are distributed. Also this forest is a dwelling of birds, deer, flying squirrels and many kind of beetles.

We are sure that this program will be your memorable time in Nara.

Nara has a long history and is renowned for having three World Heritage sites; “Buddhist Monuments in the Horyu-ji Area,” “Historic Monuments of Ancient Nara,” and “Sacred Sites and Pilgrimage Routes in the Kii Mountain Range.” Because of its long history, various Japanese cultures originated in Nara, and here are some programs for you to experience them.

It is believed that the first bout of Sumo took place in Nara between “Nomi no Sukune” and “Taima no Kehaya,” who was living in current Katsuragi-city, Nara. In 1990, Kehayaza Sumo Museum was built in Katsuragi-city.

“Sumo Premium Tour” offers you various exciting experiences related to Sumo at “Kehayaza.” The highlight of the tour is a full-sized Sumo ring called “Dohyo,” where you can try Sumo wrestling. Also, enjoy a traditional song “Sumo Jinku,” which is unique to Sumo and usually performed at the Grand Sumo Tournament. This museum houses more than 12,000 materials such as books related Sumo, “Banzuke” rankings, and “Hoshitori-hyo” matches and results.

The tea ceremony, one of the exceptional Japanese culture, teaches the beauty of simplicity “Wabi and Sabi.” It was also born in Nara, so it is said.
A custom of drinking tea has existed since ancient times, but the current style of the Japanese tea ceremony was established in the 15th century by “Murata Juko” of Nara. In the 16th century, many tea masters surged including renowned “Sen no Rikyu” while the tea ceremony blossomed, and various schools of the tea ceremony evolved. One of the schools was “Sekishu-ryu” based in Yamatokoriyama-city, Nara, which was started by “Katagiri Sadamasa”, a feudal lord of this area. In the Edo period (17th-19th century), this school became the official style of the Tokugawa shogunate, and thus favored by the feudal ruling class of Japan at the time. 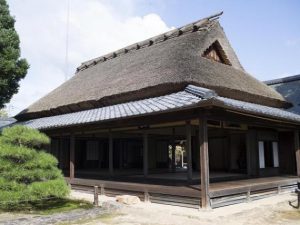 In this tour, you will attend an authentic tea ceremony at Jiko-in Zen Temple that was founded by Katagiri Sadamasa. The whole grounds of Jiko-in Zen Temple was designed as one tea-ceremony house. Once you step into an approach to the temple grounds from the first gate, you are guided to a drawing room where you can see a pristine, manicured garden. There are also small tea rooms that make you feel like you’ve slipped back in time. All necessary settings for inviting people to the tea ceremony are here. It is a precious place, and rare even in Japan, where you can be in the scene staged by the great tea master from 300 years ago to find peace.